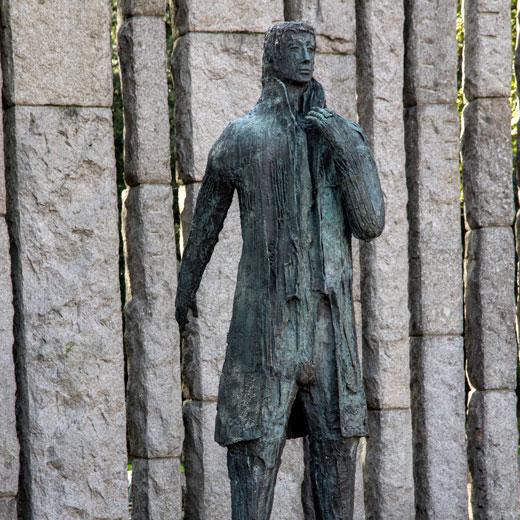 "Theobald Wolfe Tone's diaries - or 'memoranda' as he termed them - are among the often-overlooked treasures of Irish literary historiography. Tone himself is a colossal presence not only in Irish but world history.”

The son of a Church of Ireland coach-maker who briefly considered an acting career as a young man, Theobald Wolfe Tone rose to become the leader of the 1798 Irish Rebellion, and is widely regarded as the father of Irish republicanism. Taken prisoner by British forces after refusing an offer of escape from French allies, he died in Provost's Prison in Dublin at the age of 35. At his court-martial, Tone declared that '[t]o contend against British Tyranny, I have braved the fatigues and terrors of the field of battle [...] After all I have done for a sacred cause, death is no sacrifice.'

In 1964, sculptor Edward Delaney and architect Noel Keating began work on the Wolfe Tone monument, with the statue and surrounding framework of granite monoliths unveiled three years later. After being criticised for making the figure of Tone too big, Delaney retorted that 'Tone figured life-size in a park setting would look like a leprechaun.'