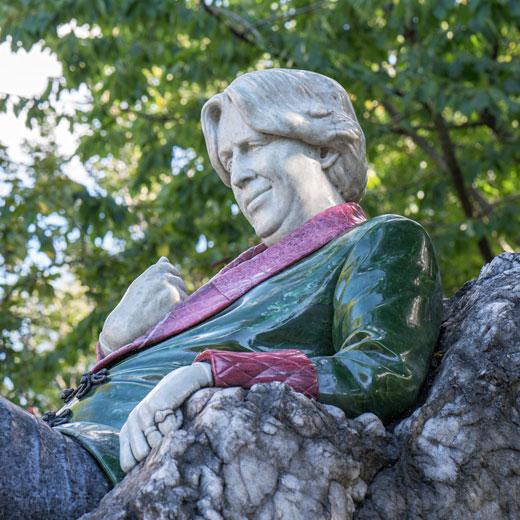 "In Chicago last year I came across a cow statue with a plaque inviting me to phone it. I took it to be a joke, but thought how wonderful if it weren't. Then I found out it wasn't! It's a wonderful initiative, and I was pleased and proud to be part of it.”

Oscar Fingal O'Flahertie Wills Wilde was born in 1854 to leading Dublin intellectuals; his mother, the poet Jane Wilde, inspired the young Oscar and his older brother Willie with a love of poetry and the ancient Greek and Roman worlds. The author of The Picture of Dorian Gray, Lady Windermere's Fan and De Profundis was celebrated for his wit throughout his life. While studying Classics at Trinity College Dublin and Oxford, Wilde decorated his Oxford  rooms with peacock feathers, lilies, sunflowers and other objets d'art, once remarking to friends, "I find it harder and harder every day to live up to my blue china."

Danny Osborne's colourful statue of Wilde was made using semi-precious stones, reflecting the writer's love of beautiful objects; his flamboyant green smoking jacket is made of nephrite jade, and its pink collar and cuffs are carved from thulite. The stone pillars by the statue are covered in quotations from his writings.