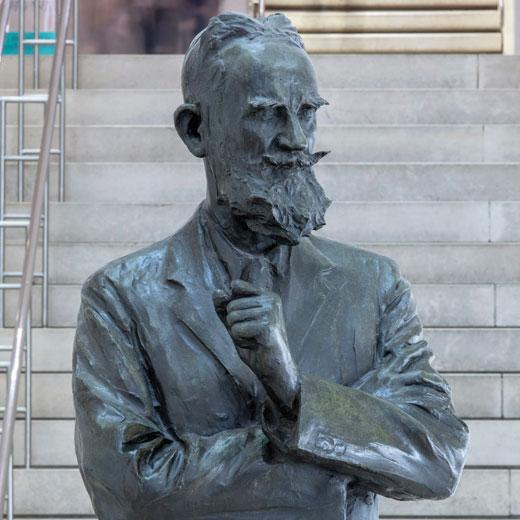 "I've always felt that art galleries are my churches, so I've always enjoyed going to the National Gallery and seeing Shaw standing outside. I've acted in several Shaw plays, including Pygmalion, so it was a great pleasure to be involved in this project!”

Writing Pygmalion in 1912, George Bernard Shaw probably didn't suspect that the play's enormous success - and its 1964 film adaptation My Fair Lady - would allow him to leave a considerable bequest to his beloved National Gallery of Ireland. In later life he would credit it with being the place 'to which I owe much of the only real education I ever got as a boy in Éire'. After leaving school at the age of 14, and he bequeathed a third of his royalties to the Gallery upon his death in 1950.

The life-size bronze statue of Shaw, which stands by the Gallery's Clare Street entrance, was sculpted by the Russian artist Paolo Troubetzkoy, who the playwright described as 'the most astonishing sculptor of modern times'. Sharing a love of vegetarianism, the two men became friends, and Troubetzkoy would go on to make three sculptures depicting Shaw.