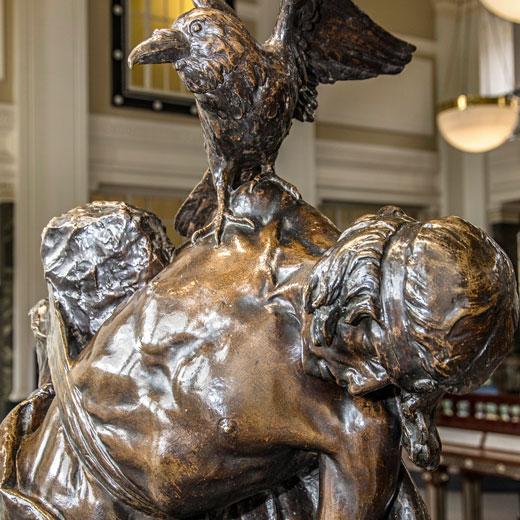 "The story of Cú Culainn is one of the stories we grow up listening to as children in Ireland. They're part of our psyche, ingrained in us. And it's wonderful if your voice can bring a young child walking into the GPO into these amazing fantasies.”

The son of the warrior god Lugh and the mortal woman Deichtine, young Cú Chulainn ('the hound of Culann') won his name after killing the smith Culann's fierce hound in self-defence, and offering his services as a guard dog in its place. In the Táin he is described as a handsome youth with vari-coloured hair - 'brown at the base, blood-red in the middle, and a crown of golden yellow' - and seven fingers and toes on each hand and foot.

Oliver Shepard's sculpture of the death of Cú Chulainn - killed in battle by his enemy Lugaid - was chosen by Éamon de Valera as the official memorial to the 1916 Easter Rising. At its unveiling at the General Post Office in 1935, de Valera described the work as “a beautiful piece of sculpture, the creation of Irish genius, symbolising the dauntless courage and abiding constancy of our people.”